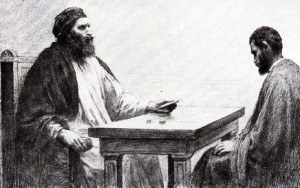 High Time to Deliver the Harvest

First the Reading: Matthew Ch 21: 33 – 46
33“Listen to another parable. There was a landowner who planted a vineyard, put a fence around it, dug a wine press in it, and built a watchtower. Then he leased it to tenants and went to another country. 34When the harvest time had come, he sent his slaves to the tenants to collect his produce. 35But the tenants seized his slaves and beat one, killed another, and stoned another. 36Again he sent other slaves, more than the first; and they treated them in the same way. 37Finally he sent his son to them, saying, ‘They will respect my son.’ 38But when the tenants saw the son, they said to themselves, ‘This is the heir; come, let us kill him and get his inheritance.” 39So they seized him, threw him out of the vineyard, and killed him. 40Now when the owner of the vineyard comes, what will he do to those tenants?” 41They said to him, “He will put those wretches to a miserable death, and lease the vineyard to other tenants who will give him the produce at the harvest time.” 42Jesus said to them, “Have you never read in the scriptures: ‘The stone that the builders rejected has become the cornerstone; this was the Lord’s doing, and it is amazing in our eyes’? 43Therefore I tell you, the kingdom of God will be taken away from you and given to a people who produce the fruits of the kingdom. 44The one who falls on this stone will be broken to pieces; and it will crush anyone on whom it falls.” 45When the chief priests and the Pharisees heard his parables, they realized that he was speaking about them. 46They wanted to arrest him, but they feared the crowds, because they regarded him as a prophet.

There are different ways of reading the history of the Christian Church. Despite the subconscious acknowledgement that there is one Jesus and one essential gospel it is easy to get so tied up in the minutiae of our present local church setting that we might easily miss just how many times this particular parable has played out in the shaping and reshaping of the church into its current myriad forms.
As with many of the New Testament stories the key to unlock this allegory comes from earlier teaching. In this case the prophet Isaiah.
Isaiah talks of the “well-beloved” as an image for God and talks of God’s pleasant planting – his people. Isaiah’s vineyard refers of course to the 8 century BC people of Judah, but Isaiah earlier explains very clearly what the harvest is. The people are expected to be an example – a shining light or beacon to the whole of humankind and in that context the harvest is behaviour in keeping with the character of God, with an emphasis on providing justice. If we look back to the first chapter of Isaiah we even find this justice defined. In verse 17 he explains it in terms of rescuing the oppressed, defending the orphan and pleading for the widow.
And in case there should be any mistake about how important this is to Isaiah he makes it every bit as clear that if this justice is not delivered, it doesn’t matter how pious the people might sound – it is futile without the acts of justice. In that case Isaiah hears God’s words (Isaiah Ch 1 verse 13): Incense is an abomination to me.
Jesus theme is the same. The nation of Israel is that planting of grapes. The harvest which is to be produced is still justice. The workers are given chance after chance to hear the agents of the Lord – coming as slaves of the Lord which presumably are intended to represent the prophets, and the last of these is the owners son – clearly Jesus himself, and all came asking for the harvest. But not only are the earlier prophets ignored then reviled – What did Matthew say? : “beat one, killed another and stoned a third”…but then even the son himself – the son understood to be Jesus is taken to be killed.
Matthew in choosing this parable to record was writing at a time when Jesus had already been sent to the cross – and undoubtedly the listeners also saw the connection between the son of the land owner and Jesus himself.
Yet Matthew records Jesus as saying even that killing the son won’t stop the God from his insistence on the harvest. Thus comes the truth that would have been very upsetting to some in the audience. What of the tenants who had had their chance to deliver justice – to deliver the harvest and failed? They will be put to death by the owner of the vineyard and the vineyard given to others to take on the responsibility of the harvest.
The reason why this would have been upsetting is that, for the Jews of that time, there was an absolute self-assurance that they were the chosen people. Their whole faith was predicated on that assumption and to have someone say that they had had their chance and missed it would have been very hard to swallow. And I suggest it would be much the same for anyone today thinking that they had joined a Church with a satisfying theology where they felt at home with their place – in effect among the chosen…then to hear in effect that the Church had dropped the ball and some other people would have to pick it up.
Remember Matthew was probably writing after the knowledge that the Jews had been turfed out of Jerusalem by the Romans, and I suspect he believed the parable was saying that the Jews had missed their chance to deliver Justice – now it was up to the new Christian church to deliver.
But we have one advantage that Matthew did not have. We can read our Church histories and see that this story has actually been played out not just once but a number of times in the history since. That early church started to deliver – then failed. Others then took over… and in time they too lost sight of the purpose of the harvest.
Time after time the vineyard shapes up to give a great harvest and the workers lose sight of why they are there and treat those who call them back to their task with contempt or worse. When this happens the tasks are re-allotted to others – and a new Church is needed.
Think for example of the Roman Catholic Church at the time of Martin Luther, ensuring prestige power and great wealth for the Church hierarchy. They had even hit upon the idea of selling places in heaven with the sale of what they called indulgences and had subverted the message of the gospel to the point where it had practically disappeared. Martin Luther increasing discomfited by the Church failing to care about the harvest as delivered justice listed all the things he saw as being wrong and nailed up the list on the doors of the cathedral – the result was a total reformation – and the start of a new Church – the Protestant Church.

And as I suggested it is a story many times repeated. John Wesley seeing what had become an exclusive Anglican Church, a Church which had morphed into becoming a support of the wealthy, offended those who I suggest were uncomfortable in hearing his back to the basics social gospel – and was prevented from preaching in the Anglican Churches which is how the Methodist Church got underway.

Now however it is underway and has been going for a good few years we in our turn must be vigilant that issues like justice are not taking second place to Church maintenance and focus on ourselves.

Remember the more recent parable of the life saving station. (Found in Personal Evangelism 101 By Brent Hunter). In summary the parable goes something like this: In order to deal with the large number of shipwrecks on a particularly dangerous bit of coast some local people set up a rudimentary lifeboat shed and performed many rescues. Then as success attracted more donations a better and more comfortable lifeboat station was built – so comfortable in fact that dripping survivors messed it up and were not really welcome.

On a cold blustery day it was better to stay in the warmth and comfort of the lifeboat station – and the number of rescues tailed off. Eventually a few noticed that no rescues were happening, they protested and were told that if they insisted that life saving was still important, there was nothing to stop them going down the coast and setting up for themselves. And they did set up their own tin shed a little way down the coast where the cycle repeated.

Now of course there are many lifeboat stations down the coast – most of which are comfortable club houses – yet most who are shipwrecked still drown.

It is not up to me to say where a nation wide Church or even an individual congregation is in this cycle. The Methodist Church in its Mission statement has a phrase “each member a minister”. Rather than concern ourselves with “what’s in it for me?” it is worth remembering that “Each member a minister” is a very perceptive phrase  which is rather easily glossed over.  This I guess another way of acknowledging that the buck doesnt stop with a Pope or Archbishop or President of the Church conference or even the leader of the parish.   The buck stops with you and me.If we take this seriously it should not therefore simply be left to designated leaders to speak on the issue of justice as they feel like it. This is an issue where we as members, each as ministers, have to calmly and deliberately look at the evidence that we are still focussed on justice, and if not, ask seriously what steps we will take..

It is simply not possible to tackle every single justice issue but to my way of thinking maybe a case could be made that we no longer have the balance right.
The contemporary dimension of the parable of the labourers in the vineyard is that the need for justice is just as important now as ever it was. There are very obvious and numerous examples where people are suffering terrible injustice. There are clearly those living without freedom and political rights. The one eighth of the world’s population who are inadequately fed in a world where enough can be produced is in my book an injustice. I think the same could be said for those whose lives are made miserable by slave labour conditions, the child prostitutes, those stuck in refugee camps because nations like ours say we can do virtually nothing, or those rotting in prisons without right to a fair trial. The large percentage of young children even in this country living below the poverty line is also another issue which needs attention. Those denied medical assistance, or basic education, or clean water also seek justice.
There are labourers working in the vineyards addressing such issues – but I would suggest to you that there are equally those whose actions show a total disregard for the harvest of justice.

The parable is clear. If we insist that our own interests come first and that helping with the harvest is not our concern – it may even be that the responsibility be left to some other people.

This entry was posted in Sermons and tagged homily, justice?, Lectionary Sermon 2 October, Matthew 21:33 - 46, the Parable of the labourers in the Vineyard. Bookmark the permalink.